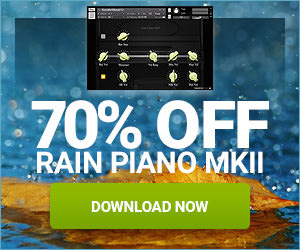 The “Rain Piano MkII” was recorded after some extensive Tom Waits listening. Specially the ”Mule Variations” album, (great stuff!). The guys at Sampletekk fell in love with the piano sound on that record and decided they wanted make something in that line.

Sampletekk: ”I want the piano to sound like it’s been out in the rain for a few days”

The result is an instrument that is perfect for ambient, underscore, solo piano music and much more!

The History of “Rain Piano”.

About ten years ago Sampletekk created a concept where they set up a piano so that it would produce a lot more overtones but still work well with other, properly tuned, instruments. At the time, even though it was released as a straightforward, 16-bit sample library without any release samples, it became a kind of a synonym for character pianos. To this day it is still used on countless productions where something a little different from a ”normal” piano is required.

Since then samplers have been become far more advanced and although the original “Rain Piano” is still one of Sampletekk’s most popular pianos, they decided to bring it up to date and add some functions in the line of the original ideas. They went back to the original master recordings (which where in 24 bits), made some refinements to them and rebuilt the instrument from scratch. They also addedhammer-back, pedal-noise and release samples.

To top this all off they also added their True Resonance ™feature and used Kontakt’s scripting facilities to make Real Time/True Pedaling, Sympathetic Resonance plus some other nifty features, and, Voila: The “Rain Piano MkII” was born!