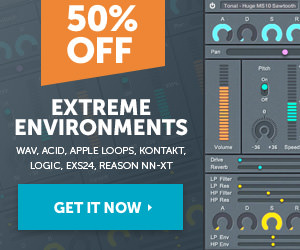 “Extreme Environments” is a unique sound design tool that allows you to quickly and easily create dense and complex ambiances, ranging from musical pads through to realistic room tones and extreme sound design.

This is a sound designer’s dream… delivering an endless and interesting array of edgy textures, drones and washes that are perfect for sound design, underscore, trailer and industrial music!

What is “Si Begg’s Extreme Environments”?

How does it work?

The main feature of Extreme Environments is the Kontakt instrument which combines a state-of-the-art user interface with the loops and impulse responses to give you a highly flexible tool for creating a huge variety of beds, drones, pads and FX. It comes with over 150 presets.

NOTE: You must already have a FULL VERSION of Native Instruments Kontakt (version 5.3.0 or later) in order to use the Extreme Environments Kontakt instrument. It is not a VST plugin or standalone instrument.

The core of the instrument is the three channels where you can select any one of the 142 loops. For each channel you can then control the pitch, time stretch, amplitude & filterenvelopes, saturation and reverb send. All three channels are then mixed together and put through master high passand low pass filters, then finally a limiter.

The other key part of the instrument is the convolution reverb, which any of the three channels can be sent to. You can choose any one of the 86 bespoke impulse responses, ranging from straightforward to extreme sound design. This adds great depth and atmospheric detail beyond the standard reverbs you might usually come across.

The combination of all these features makes for an almost limitless palette of sound creation. In addition the EXS24instruments, Apple Loops, Space Designer presets and Channel Strip Settings give Logic Pro X users the option of creating their own combinations of sounds and FX withinLogic. Also, the raw audio loops (as WAV files) can also be used as building blocks to create your own beds and drones.