“Well, this one is pretty self explanatory, it’s a music box library for Kontakt….done the Soundiron way!  Of course they have captured and created a nice sounding music box, but they also give you the tools to tweak those sounds.

So while you can play the music box in it’s “normal” way, you know they make their products super useful for experimentation and sound design purposes.  Their products are aimed at composers of course so…not just the “typical” layout and tools.  However… that’s why we love em!”

The Musique Box is a complete collection of various deeply sampled music boxes. I love the sound of the music boxes in the library, but even more I love the random ambiances and experimental sounds they’ve created from the sampled sources.

I also like that it’s a layered instrument so you get to pick and mix between two different layers in a patch which makes for some awesome textures. Layering the “standard” music box tones with some of the more ambient and experimental ones to come up with brand new sounds and ideas is quick and easy.

The Musique Box also includes a large collection of bonus content and creative features you won’t find anywhere else: 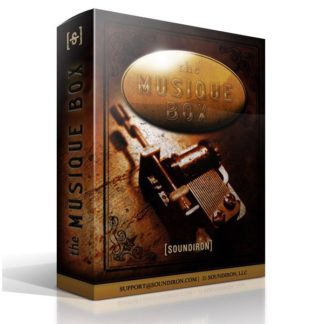