“If you love drum samples then you can never have too many breaks, there’s always new drum sounds and combinations to discover. This collection of breaks was recorded in an amzaing sounding room and features and amazing drummer as well.

They included both unprocessed AND lo-fi versions of the breaks to give you a bit of variety to work with.  If you’re looking for new inspiration and want to draw from the authentic sound of a real drummer, checkout this pack from BeatPPL.”

‘The Big Room Theory’ Breaks were recorded in a historical recording facility in the NoHo Arts District of Southern California. Because the room is as important as the instrument and the musician that plays it, the idea going in was simple… “Set up and capture drums in the legendary BIG ROOM where many legends had recorded decades ago (including the likes of Marvin Gaye, Aretha Franklin, Michael Jackson and Earth, Wind & Fire).”

To that end, the deed was done when BBoyTech got with professional drummer, Dominic Feedman, to record the sessions that would become ‘The Big Room Theory’ Breaks.

The drum set was mic’d both close (on individual drums), with two overhead mics and a room mic in the big live room. This configuration allowed for the resulting recording to take on the rooms characteristics as much as it would allow for capturing the richness of the drum set.

The recording chain utilized various professional outboard gear for nearly each and every drum in the room.

If you want that drum magic from decades past, it’s right here. Also included is a lo-fi folder with lo-fi, punchy and HUGE booming versions of the breaks. These breaks are perfect for chopping up into the illest one shots. Trust… that snare is magical!
Also, the unprocessed breaks (for lack of a better term) are recorded to perfection with no peaking levels. There is plenty of head room on the unprocessed breaks for you to effect and process to your liking inside of your favorite DAW. 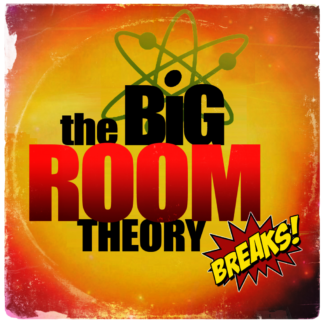